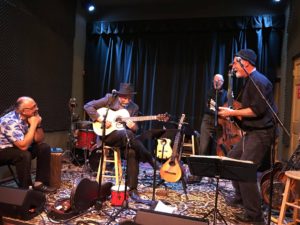 “The  ferocious strum ‘n’ pick virtuosity is intimidating at first, but the music is so bursting with exuberance it helps to modulate the awesome technical prowess.” (Jeff Stratton, Boulder Weekly)

“Some of the most innovative and unique music to emerge from this area” (Jeff Stratton, Boulder Weekly)

Asleep At the Wheel

Bela Fleck and the Flecktones

Video of an excerpt from the tune “Valentine” performed at Swallow Hill (2017):