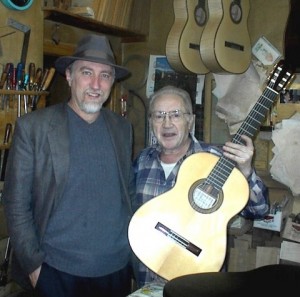 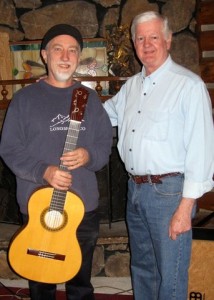 There may not be many people out there who (like me) want to know about the instruments other people are playing; who made them, the subtleties of their sound, their scale lengths, bracing patterns, and such.  I’m a bit of a nerd that way.  I love instruments, and I love the adjectives and metaphors used to describe this elusive thing called “tone.”  I think that instrument builders are some of the most creative and underappreciated artists.  Where would we be without Amati, Stradivarius, Loyd Loar–or in my favorite world of wood and tone; the Spanish guitar–Santos Hernandez, Esteso, Barbero, Ramirez, Reyes, and so on?  This page, then, is dedicated to discussion and description of the instruments that I use (and occasionally buy and sell), honoring the practitioners of the luthier’s art, and sharing some of my thoughts on the subject.

If you’re looking for a flamenco guitar, you might find one here as well. 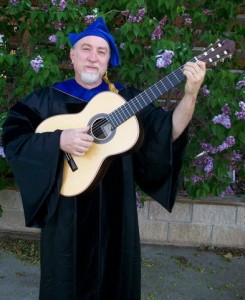 I have owned over 140 classical and flamenco guitars in the past.  (I’ve always had to sell one in order to buy another; monogamy just doesn’t seem possible for me when it comes to guitars).  I’ve been particularly fond of the builders and sound of Granada.  I’ve owned Ferrers, Marins, a Plazuelo, several Bellidos, and a Diaz.  I’ve also owned many guitars from Madrid; Ramirez, Condes, Manzaneros, Jose Romeros, and so on.  I would describe the Granada sound (in general) as more direct, clean, crisp, woody, delicate, while the Madrid sound tends to be more complex, elegant, dark, etc. (though there are many exceptions).  I have owned 3 guitars built by Manuel Reyes in Cordoba, which (in keeping with his lofty reputation) were close to perfectly “balanced,” without any obvious weakness, combining the qualities of Granada and Madrid.  I have also owned a Paulino Bernabe blanca and two Gerundino Fernandez blancas.  I am very fond of a number of American builders, especially Ron Bushman, Brian Burns, Aaron Green, German Vasquez Rubio, Lester Devoe, and Darren Hippner (I’ve owned 15 different Hippners).

Currently I own and perform with 6 great guitars, 4 blancas: a 1994 Pedro Maldonado with maple back and sides, a 2014 Brian Burns, a 1988 Stephen Kakos, and a 2014 Hermanos Sanchis Lopez.  I also play a wonderful negra by Felix Manzanero (built in 1966) and a great classical built by Francisco Navarro in 2011 (Smallman model). 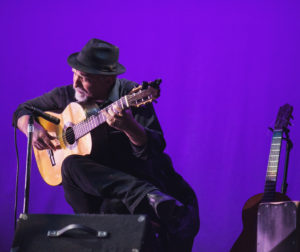 At the moment (and for the last few years) I own only one mandolin, an F-5 model built by Gavin Baird.  I have owned 3 Nuggets, several Gibsons, a Givens, etc.  I have also owned 2 other Bairds.   I love the purity of tone of my Baird, it makes most other mandolins seem brash and often “tinny.” 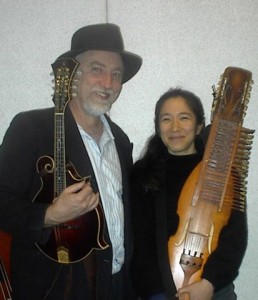 With my Baird mandolin, Sandra Wong and her nykelharpa

I play a banjola built by the inventor of the instrument and master craftsman; Edward Dick (not the Gold Tone Imposters).  Mine, to date, is the only 9-string nylon-string.  I like to say that I am the best player of 9-string-nylon-string-banjola in the world as long as I don’t let anyone else play mine.  It has a beautiful lute-like tone, crisp, woody, sweet, and percussive. 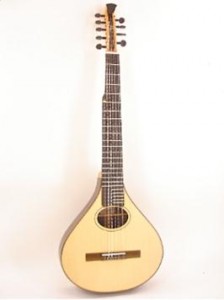