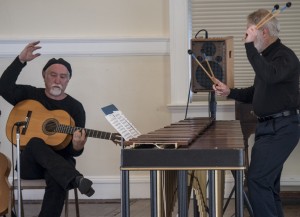 A unique fusion of Spanish flamenco and American Jazz performed on marimba (by Dr. Doug Walter) with guitar and nylon-string banjola (by Dr. Steve Mullins).

Versatile percussionist Douglas Walter has developed an excellent international reputation as a marimba and vibraphone artist in both the classical and jazz fields.  The only keyboard mallet artist to win a first place prize in the Concert Artists Guild Competition in New York City, Walter has performed  over 300 solo recitals and concerti in Canada, France, England, Ukraine, Lithuania, Norway, The United States, and Switzerland.  His repertoire includes contemporary works, ragtime, over 50 commissions he has premiered,  personal transcriptions of Bach, Bartok, Castelnuovo-Tedesco & others and solo jazz improvisations on tunes he has written.  Dr. Walter’s solo recitals at PASICs received standing ovations.

A champion of the rhythmically exciting work of Dan Levitan, Dr. Walter has commissioned music with support from the National Endowment for the Arts,the Canada Council, & several state arts-funding organizations.

An accomplished orchestral musician, Dr. Walter has performed with the Dallas, Santa Fe Opera, Flint, Fort Worth, Oregon, Colorado Ballet, Philadelphia, Salem, Terre Haute, Indianapolis, Delaware Symphony Orchestras,  and the Colorado Music Festival Orchestra, among others. After serving from 1992-1999  as the Principal Percussionist,  he has since been Timpanist with the Boulder Philharmonic Orchestra.   He has toured for twenty years with the Westminster Brass.

As director of percussion studies at the University of Colorado at Boulder, Dr. Walter teaches undergraduate through doctoral students from around the world and directs the marimba and percussion ensembles.

is an accomplished composer, multi-instrumentalist, and ethnomusicologist.  He is on the faculty of the college of music at the University of Colorado where he earned his doctorate in ethnomusicology. His doctoral dissertation is entitled Flamenco Gestures: Musical Meaning in Motion, dealing with aesthetics in Spanish flamenco.

He has been a columnist for Mandolin Magazine since its inception in 1999.  His compositions have been heard in settings as diverse as television commercials, documentaries, national public radio, silent movies, multi-media flamenco shows, and dancing horse performances at the National Western stock show.   He has performed with the Colorado Music Festival orchestra, the Boulder Philharmonic, the Longmont Symphony, Denver Brass, and the Boulder Maher Festival Orchestra.  He is a member of Mike David’s “Spirit of Adventure” ensemble, the groups Ojaleo, Fiesta Colorado, the Barbelfish Balkan Band, Laughing Hands, Rim of the Well, and Dance España.

He has received numerous grants and commissions to compose music for dance productions and other events in Colorado, including a flamenco suite for orchestra performed by the Longmont symphony in November 2011.  He is also the author of the 1st ever banjola instruction book. He has performed in Mexico, Spain, Germany, Switzerland, the Netherlands, and throughout the Western United States, including performances at the Newman Center, the Lincoln Center, Boettcher Concert Hall, Boulder’s Chautauqua Auditorium, and the Arvada Center.